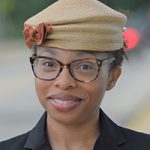 Kelli Coles  – Kelli is a third year PhD student and AAPHI fellow. In Fall 2020, she began the second year of the UNIDEL Louise Roselle Graduate Research Assistantship at Winterthur Museum in the Textile Conservation Lab. She also continued in her role as Co-Chair of the Website and Digital Exhibits Committee for the Colored Conventions Project (CCP). In October 2020 Kelli presented her research, “Schoolgirl Embroideries and Black Girlhood in Antebellum Philadelphia” at the Textile Society of America’s Virtual Symposia, “Hidden Stories/Human Lives.” She has participated in 2 podcast interviews: the “Sew What?” podcast with Isabella Rosner, and the “Voices of Change” podcast with Alexander Ames. The latter podcast was conducted in conjunction with the Alice Dunbar Nelson exhibit, “I Am An American” at the Rosenbach Museum. Kelli served as an Advisory Committee Member for the Rosenbach Museum and the Alice Dunbar Nelson exhibit. During the Spring 2021 semester Kelli participated in a virtual conversation with former AAPHI scholar, Dr. Mali Collins, at the Mitchell Center of African American Heritage (Delaware Historical Society) at the invitation of Director Dr. Stephanie Lampkin, for Women’s History Month, to discuss Black motherhood and girlhood. Her talk was titled, “Black Girlhood and Motherhood Studies in the DHS Moseley Doll Collection.” Kelli was awarded the Catherine Flon Award by UD’s History Graduate Studies Committee to aid in continuing her research. In the summer of 2021, Kelli recieved the E. Lyman Stewart Exhibit Design Summer Internship at the Zwaanendael Museum where she conducted research and oral histories on the beaches of Delaware that were segregated and frequented by Black Delawareans and Black elite of the early 20th century. This work will include planning for a digital exhibit as well as for an exhibit within the museum in Lewes, DE.

Monet Timmons – Monet Timmons is a third year English PhD student and AAPHI scholar at the University of  Delaware. Her research interests include 19th and 20th century Black women’s literature,  examining Black women’s archives and personal papers. Monet has worked with Dr. Julie McGee on exhibition “David Driskell: Icons of Nature and History” where  she wrote the chronology and bibliography of Driskell’s life for the exhibition catalog. She worked with Dr. Jesse Erickson as a co-curator for “‘I Am An American!’: The Authorship and Activism of Alice Dunbar-Nelson” at the Rosenbach Museum in Philadelphia, PA. She is currently studying for her comprehensive exam which, when passed, will propel her to the PhD candidate phase. This summer, she will participate in the DELPHI Summer fellowship where her final project will include a webinar with other Black women scholars and curators committed to telling Black girls and women’s stories in public spaces.