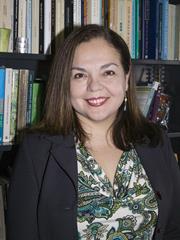 Professor Mónica Domínguez Torres specializes in the art of the early modern Iberian world, with particular interest in the cross-cultural exchanges that took place across Spain and the Americas during the period 1500-17​00. She received a B.A. in Art History from the Universidad Central de Venezuela, a Masters in Museum Studies and a Ph.D. in the History of Art from the University of Toronto, Canada. Since 2005, she holds a joint appointment in Latin American and Iberian Studies.​

With Professor Wendy Bellion, she co-edited Objects in Motion: Art and Material Culture across Colonial North America (2011), a special issue of the journal Winterthur Portfolio featuring papers presented at an international symposium they organized at the University of Delaware in 2008.  Her essay “Pearl Fishing in the Caribbean: Early Images of Slavery and Forced Migration in the Americas” appeared in the volume African Diaspora in the Cultures of Latin America, the Caribbean and the United States, edited by Persephone Braham (University of Delaware Press, 2015).