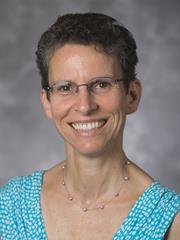 ​Alison M. Parker is the Chair and a Professor of History at the University of Delaware. She has research and teaching interests at the intersections of gender, race, disability, citizenship and the law in U.S. history. She majored in art history and history at the University of California, Berkeley and earned a PhD from the Johns Hopkins University. In 2017-2018, Parker was an Andrew W. Mellon Advanced Fellow at the James Weldon Johnson Institute for the Study of Race and Difference at Emory University, where she worked on her current book project, a biography of the civil rights activist and suffragist Mary Church Terrell. Unceasing Militant: The Life of Mary Church Terrell is forthcoming with the University of North Carolina Press in its John Hope Franklin Series in African American History and Culture. Parker is the author of two historical monographs, Articulating Rights: Nineteenth-Century American Women on Race, Reform, and the State (2010) and Purifying America: Women, Cultural Reform, and Pro-Censorship Activism, 1873-1933 (1997). She has also co-edited three anthologies and authored numerous articles and book chapters. While a faculty member at the State University of New York, College at Brockport, Parker was awarded the SUNY Chancellor’s Award for Excellence in Research and Creative Activity (2012). Her next book project is a study of the civil rights activist, Mary Hamilton, the first female field director for the Congress of Racial Equality (CORE). Parker serves as the founding editor of the Gender and Race in American History book series for the University of Rochester Press. As Chair of the History Department at the University of Delaware, Parker is committed to building a coalition of students, faculty, and staff promoting a wide-ranging anti-racism agenda. She is trained to lead antiracism and racial justice workshops and community conversations and will work to recruit and retain a diverse community of faculty and students.