DENISE BURGHER is a Ph.D. candidate in the English Department. Denise is interested in nineteenth-century literature written by women of the African diaspora but particularly the texts that come out of the Afro-Protestant world. She served as co-leader of the exhibits team and the chair of the project’s historic church outreach committee for The Colored Conventions Project, where she participated in the creation of an online curriculum.  Denise is one of the co-authors of an upcoming book on crowdsourcing, “The Collective Wisdom Handbook: perspectives on crowdsourcing in cultural heritage.” 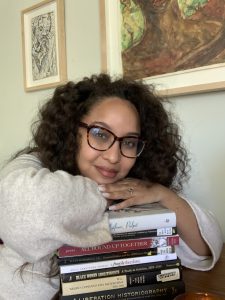 BRANDI LOCKE is a Ph.D. candidate in the English Department, interested in African American women writers of novels, pamphlets, and newspapers in the Reconstruction Era. Her focus is on respectability politics, modes of self-representation, and socio-political and Black nationalist organizing in the Clubwomen’s Movement, with special attention to archival print and material culture. Brandi is also a member of the Colored Conventions Project.  This past year she wrote her dissertation proposal and had it approved after revision, completing her fifth year as a PhD student and advancing to doctoral candidacy (officially ABD). Her work centers her first and second dissertation chapters, focusing on two generations of Black feminist activist-writers in the two decades before the Civil War and in the last decade of the nineteenth century. This past year as a Colored Conventions Project (CCP) fellow within the Center for Black Digital Research (CBDR) at Penn State, she continued her work of processing of digitized record, curating metadata, managing archival research, and started supervising the training of new Penn State graduate student team members. This summer she will co-write an Oxford Encyclopedia entry about the Colored Conventions Movement. Brandi has completed a scholarly digital exhibit on the first Black woman newspaper editor in North America, Mary Ann Shadd Cary. This work on Shadd Cary will continue into the summer by supporting the curation of an exhibit at the Mitchell Center at the Delaware Historical Society, and has been accepted to symposium and edited volume produced by the CBDR and Queens University in Canada. Brandi is very excited about a new initiative she started at the CBDR in developing and managing center projects partnering with public arts groups. She is currently project managing the production of 4 murals and community-based programs with MuralArts Philadelphia to depict the history of the colored conventions in Philadelphia and Delaware. This summer she is traveling to London and Cambridge to conduct research in recently reopened archives to consider the international aspects of Black women’s feminist activism and writing. She is also meeting with Black British artists and curators to discuss their work and the future of Black diasporic public history and art, in conversation with the center’s art initiative. Her MLA international presentation and other work in Glasgow, Scotland has been postponed to 2022 due to covid.